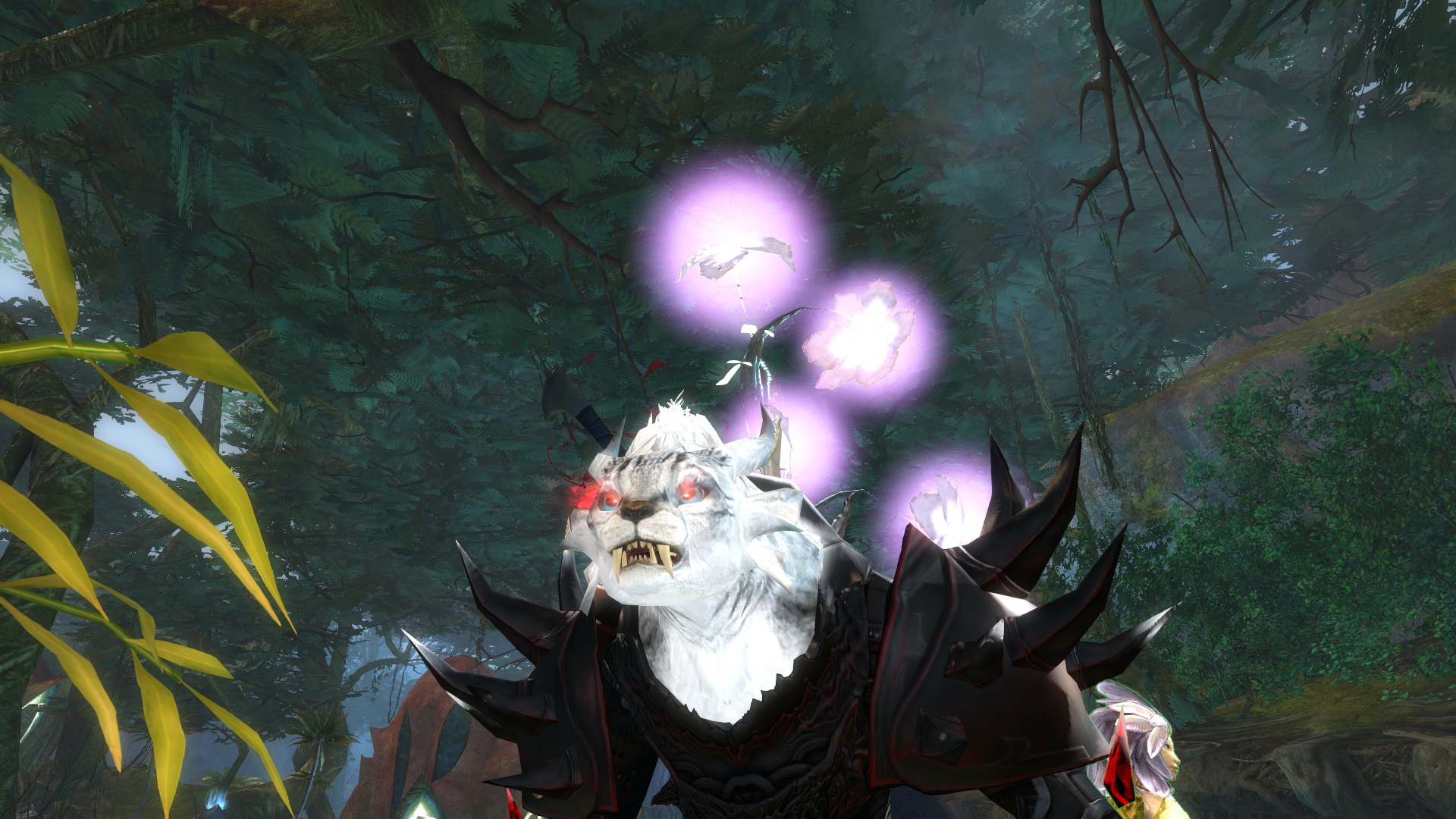 This article is about a mission. This name is also used for an outpost and a Zaishen mission quest.

The Shining Blade's plan to reassemble the portal to the Henge of Denravi has been betrayed to the White Mantle, who have been slaughtering all who stand in their way as they try to claim it. Should the Shining Blade succeed, they will gain a new, hidden base of operations to strike back at the Mantle. Fail, and not only will the Henge be lost to the Shining Blade, but their resistance movement will collapse as well.

The first part of this mission is typical: hack and slash through the usual Maguuma Jungle foes and bosses. Things change drastically when you reach the Druids.

The goal of the mission is to attune a set of three thorn pedestals simultaneously, while preventing the White Mantle from doing the same thing. Attuning the set clears the Vine Gate, giving your party access to the Henge Guardian; defeating it completes the mission.

There are two types of pedestals:

If you drop a crystal, it will break and you must grab a new one (and you will drop it anytime you switch weapons or shadowstep). As with any bundle, while carrying crystals, you do not gain the benefit of any of your weapon mods.

When you attune the southernmost pedestal, it opens a vine-gate allowing you to proceed northward. (The Mantle do not attempt to attune this pedestal.) After following the path, you will find Less Longbow: dispose of his attackers and talk to him to unlock the Bonus.

East of Less is another area with three thorn-pedestals. One is a spawn-pedestal, one attunement-pedestal has already been claimed by the Mantle, and the third will be unclaimed. There are several ways to proceed at this point. Generally, you want to defeat the two groups of Mantle (including a Boss), visit the spawn-pedestal, talk to the Druid, grab a crystal, claim the right attunement-pedestal and eventually claim the leftmost pedestal, which opens another vine-gate at the eastern end of the area.

Once this gate opens, the race is on between your team and the White Mantle to claim the three pedestals in the large area to the East. Get another crystal, attune the left pedestal. Be prepared to rush to the Mantle's spawn-pedestal just beyond the gate.

Method 1: Kill all the Mantle at the left shrine[edit]

This works with a single player. Pick up a crystal and go to the left-most (east) pedestal; you should arrive as the Mantle are leaving. Attune the pedestal, then flag your party around it. As the Mantle return to reclaim this pedestal first, grab another crystal, and then go to the pedestal at the far right (west) side. Alternate between claiming the left and right pedestals, as the Mantle will usually succeed in capturing your AI-held pedestal. Each time the Mantle return to the left pedestal your party will kill the runner's escort. Eventually the only Mantle left will be the runner. You will know this when you no longer see your party taking damage. (Be careful not to capture all of the pedestals at once!) Rejoin your party and kill the runner. Kill the Demagogue and claim any remaining pedestals.

If you have a good team, you might return from capturing the right-hand pedestal to find that your party has prevented the Mantle from recapturing their original pedestal. In that case, you can finish attuning the pedestals by capturing the last (i.e. center) one, advancing the mission.

Remember that killing the runner gives the Mantle an advantage: a living runner will have to return to grab a crystal, while reinforcement runners spawn near their team's crystal-supply pedestal. It also means that you might have to confront two teams of Mantle (the original escorts and the new runner's team).

Your build should include speed boosts (or use a cupcake or rock candy) and one of the following: a snare or a spike. Digital wireless camera driver. Signet of Spirits is an ideal choice, since it distracts your opponents while doing noticeable damage.

If using heroes and/or henchmen, position their flags such that they are, behind the left-most pedestal (towards the Druid) but still in range of it; this way the number of White Mantle encountered at once will not overwhelm them (especially true in Hard mode). After the heroes/henchmen fight off the first wave, spread their flags out.

You can complete this objective without wiping out the entire White Mantle contingent. Simply run a crystal to each of the three pedestals. This approach needs at least two human players in the party, with three players being preferred. You should have some speed boosts in your skillbar to allow you to outrun the White Mantle teams; each time they claim a pedestal, another team immediately heads out to claim the next.

Just remember to keep at least one pedestal claimed to avoid failing the mission.

You should have two or three players standing by the druid and the crystals. One player should pick up a crystal and run to the nearest thorn pedestal. As soon as it is set in place, a new crystal will spawn, which the second player should grab and head to the next pedestal. If you only have two runners, the first runner should return to the crystal spawn point while the second runner is out. Either way, once the crystal spawns again, repeat the process. If this is coordinated properly, you should have no trouble at all.

To make sure the White Mantle do not capture any pedestals, you can station the balance of your party (including any heroes/henchmen) at the chokepoint in the center pathway.

Note that this method can be used, with slight modification, to easily gain mission and bonus. Have two people run crystals, the second waiting by the crystal spawn point to pick it up the moment the other has attuned a pedestal. It is important that these two do not attune the last pedestal until the bonus is gained. A third person, or the rest of the party, kills the Demagogue. This can easily be done by following the south wall, you should not need to kill any White Mantle other than him if you take this path. Now the most important part: do not aggro the White Mantle runners. Two non-buffed runners can easily keep the portals attuned without hindering the White Mantle. If a third human player is not present, then this method can be done using only two. The Demagogue slayer becomes the second runner after the bonus has been gained.

Anomaly.Summoned creatures will not be teleported with the party. Allies from summoning stones will remain alive and cannot be re-summoned in the next area.

Regardless of which of the above methods you use, when you finally claim all three pedestals, a cinematic will play showing your party being teleported to the Henge. Make your way through the token resistance there to confront the Henge Guardian. He is flanked by two Root Behemoths that can wear down your party if they are not eliminated quickly. When you take out all three of them, the mission ends. The best way of killing them is by using damage over time spells such as Fire Storm, as the enemies are stationary.

Just before you enter the area with the three pedestals, you will see a Shining Blade warrior named Less Longbow near two White Mantle Knights. As you approach (to within 2 aggro circles), the Mantle will engage him in combat if Less is close enough. You will have to join the fight and save Less. If Less dies the bonus cannot be completed. To avoid this, it is possible to flag heroes/henchmen ahead; use the mission map to position them before triggering. After the two Knights are dead, speak to Less to trigger the bonus. Note: to receive credit for the bonus, you must speak to this NPC before you kill the Demagogue. Less must complete the dialogue before the Demagogue is killed to receive the bonus. (However, once you have done so, you will receive credit even if he dies later.)

Anomaly.Less will start attacking the White Mantle Knights once he is within compass range; however, the knights themselves will not do anything until the player gets close. If the player stays far outside aggro range, Less will kill both of the knights without risk to himself.

The Demagogue is located in the White Mantle starting area, on the other side of the arena with the three pedestals. You must kill him before placing the last crystal in the pedestal. The troops stationed here are also the ones that will run the crystals out to claim the pedestals, so if you killed them all previously using Method 1 described above, he will be alone. Otherwise, you will need to deal with them in addition to the Demagogue himself.

If you do not want to fight all of them, one approach is to head to the pedestal on the far right from the entrance, where you will find a path that leads past the bulk of his forces. From there, provided you hug the side furthest from them you can eliminate the Demagogue and if you are lucky, his troops will not notice.

If you are having trouble holding the pedestals, one method is to keep your heroes/henchmen at one pedestal (preferably the one to the far right) and then capture 2 and keep 2 at all times, that way when the runners capture one you will still have another and can easily regain it until all the White Mantle are dead.

If you are only going for the bonus, you can effectively skip the shuffling and take the back route directly to the Demagogue. The following method works very well even with hero/henchman parties, especially in hard mode: Grab the crystal from the Thorn Pedestal, and place it in the center shrine's pedestal. Run back and grab another crystal, and take it to the one on the far right. Without running skills, you will still have a few seconds to spare. Taking the back route, avoid the rest of the troops and go straight to the Demagogue. You will be able to kill him with just enough time to spare; you will fail the mission, but you will get the bonus. This is a very simple and reliable method. It works even better if you bring party-wide speed boosts (such as 'Fall Back!') and interrupts or knock downs to prevent him from activating Healing Signet.

Less Longbow (after saving him)

'I am grateful for your aid. You have my eternal gratitude.
'You must know, the White Mantle are led by a wicked evil man.
'He's their champion. They call him The Demagogue.
'He drives the Mantle forward. They will do anything he asks.
'Until he has been brought down, the Mantle will always have strength.'

The Demagogue (after you approach him)

'Come, my Mantle. We must eradicate the heretics!'

For more information, see Aurora Glade (cinematics)
Evennia:'Well done.'
<Party leader>:'Thank you.'
Evennia:'Now we have a safe place from which to strike back at the White Mantle. Today the tides have been turned.'
Evennia:'Come on. The old druid temple should be just over the waterfall. It's time to take a look at our new home.'
Glint:'A new chapter now lies open for Tyria.'
Glint:'The page has been turned, and the conflict begins in earnest.'
Glint:'All is as I have forseen.'

This article is about the legendary trinket. For the armor skin, see Aurora armor.

This item allows selection of stats. See below for a list of available prefixes.

Aurora is a legendary trinket obtainable through Living World Season 3. All six episodes must be unlocked in order to craft this item.

The exact visual effect depends on the total number of legendary trinkets equipped.