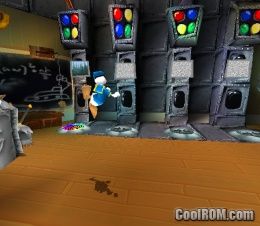 Donald's true love, Daisy, is in trouble and it is up to you to guide him through 20 levels of adventure in four 3D environments to rescue her. Offering exciting chases, end-level boss battles, and bonus levels, Disney's Donald Duck: Goin' Quackers for the PC offers many challenges, including Donald's temper, which goes from 'calm,' to 'determined,' to 'berserk,' as puzzles and enemies become increasingly difficult throughout the game.

Here you will get inside Donald's dress, sharing with him a wonderfully looking 3D adventure. The game is shared across 4 worlds each shared across four levels plus one world boss for each of the worlds. You will be fighting your way across a forest, a town, an horror world and a lava temple (I hope it did light a 'Rayman 2' light.. it looks like the same). The plot is way easy, an evil wizard did take Daisy duck away with him and of course it's Donald task to rescue her.

Donald Duck is a classical 3D platform where the gameplay is actually 2D and just the views are 3D looking like. Half of the levels are seen from Donald's shoulders, whilst another half has camera on the side of the action like most classic platformers. The level with shoulder camera scrolls across the Z axis, and as far as I know this is the only game to feature such an original scrolling idea, well, though it's like playing Mario 3D without being free to go right or left, only predefined path. The levels are full of stars, one hundred stars of course means a new life. Together with stars across the levels you will be collecting toys belonging to your lovely three nephew (of course the wizard did steal them) and ice-cream-looking-alike powerups that will get you a super Donald duck (just faster and with auto-punch on). The game plays great, first levels are easy whilst last are pretty hard and will challenge your double jump skills and joystick coordination, still the whole game takes less than 10 hours to be beaten, taking an huge amount of points out of the total for D.D.

Donald is moved trough keyboard or Joy/Gamepad, though as in any platformer an analog pad like N64/PSX is the best choice. Trough the use of two buttons Donald will jump and 'fight', using the fight button on the fly will produce a Jumping Kick a la Street Fighter, whilst pressing the jump button again being already on the fly will enhance the jump bringing Donald to unreachable places with standard jumping technique. To be allowed to fight the monster at the end of each world, you will have to collect a yellow rotating B on each of the four worlds, finding this yellow thingie is the hardest target of the whole game, the level designers really mastered the technique of hiding objects in a game with predefined paths. The four end-world bosses are pretty hard compared to the normal levels, the chicken (first boss) will be mastered by jumping on his head, he will try to get u back sitting over you with his fat ass and sending you her hungry children. The second Boss takes some practice but overall it's just about giving him a kick in the ass and sending the green TNT back to him. The third boss is pretty hard at first, but after a while you will master it, punching evil pumpkins at first and choosing the green grave at another point of the fight. At the end, last evil boss, the devil-wizard, embarrassed me.., it's like Ubi-Soft had no more ideas and chose to cut and paste the code for the lava monster out of Ray-Man 2, anyway, it's just a matter of keeping running on the lower side of the screen, activating pulls and avoiding enemy's increasing fire power, not 1/10 as hard as RayMan Last Boss.

Oh well, again UbiSoft moods have been respected, the characters do not talk, they make rumors, this way they have not to translate the game in 20 languages and still obtain a funny and pleasant effect. The Music changes according to levels and situations, really an example on what Music can do to enhance gaming experience. Sounds/Rumors are well sampled, although pretty repetitive, but the Music keeps it pretty well hidden.

It uses the same graphical engine of RayMan 2 and has even better textures, enemies other than having no artificial intelligence at all, are really repetitive, though graphically they're solid 3d models and pretty well animated too. Overall, from an esthetic point of view, the game is gorgeous, wonderful textures, a Donald Duck that has never been so cute, wonderful backgrounds. Really, nothing bad can be said about the Graphics, but well, UbiSoft 3D Engine is not a novelty. There has been an huge attention to details, like monsters getting transparent if they happens to be in the middle of Donald Duck and the camera.

It's quite as good as RayMan 2 but it has less longevity. The game is great, and although targeted at kids by many, it's a joy to play at any ages, and probably kids under 6 years will not find latter levels easy enough.