Fire Emblem - The Binding Blade Localization Patch v1.0 The old. Apply to a Japanese FE6 ROM using a UPS patcher such as NUPS or MultiPatch. There's some good stuff buried under the stiff English, so as sort of a.

Fire Emblem was always one of those innovative series that made you scratch your head trying to figure out why it never made it to the West, especially when numerous titles influenced by it were flooding the market here. The strategy RPG genre was more or less pioneered by Fire Emblem, and refined by Shining Force. So, why exactly did the series never come out here? Nobody is quite sure, although strategy RPGs definitely had a dedicated audience. Of course, eventually Nintendo DID catch on that the series should come out here, but only after Fire Emblem 7 (Just plain Fire Emblem in the U.S.) was released. So, as a result, we’ve still been missing out on the first 6 games. And, of all of them, the one i’m most puzzled about not being localized is this game: Fire Emblem 6. This game is a DIRECT SEQUEL to Fire Emblem 7, plus FE6’s main character Roy appeared in Super Smash Bros. Melee, and became pretty popular in that.

Visually, there’s not much difference between FE6, and the later GBA games. Many sprites, animations etc. are re-used between the games. Even still, the graphics are quite well done. 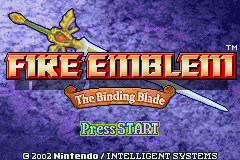 Not only can characters die, but sometimes they can die quite easily. Even your strongest units can fall fast against certain enemies. Get well acquainted with saving and loading, since you’ll be using it a lot if you hope to make it through alive. And also, take a break if you repeat the same level too many times…if only to spare some sanity. This game isn’t lacking in challenge. Especially if you try hard mode…