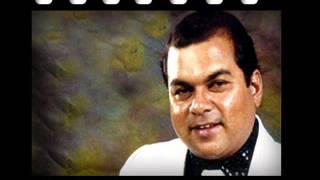 Gratien Ananda (Sinhala: ග්‍රේෂන් ආනන්ද; 11 March 1957 – 29 December 2010), also as Gration Ananda or Greshan Ananda, was a Sri Lankan singer, composer, songwriter and a lyricist.[1] Considered as the best Sinhalese film score musician to have emerged in the country since the veteran artist the Late H.R. Jothipala, Ananda sang for more than 400 films with a musical career that spanned nearly three decades.[2]

He died at the age of 52 while receiving treatments at National Hospital of Sri Lanka, Colombo.[3]

He was born on 11 March 1957 to a family immersed in music. His grand father Brigadier Charley Jayawardena Amador is a renowned musician served in Royal Army. His mother was a pianist.[4] He spent his early childhood in Kandy, after he moved to hometown Tangalle for primary education. He attended to as many as 10 schools. He first went to Little Flower Convent in Tangalle and then to St.Mathew College Dematagoda. Then he completed Advanced Level Examination from Saint Joseph's College, Colombo.[5]

He was a devoted Catholic, where he never missed a Tuesday mass at St Anthony's Church, Kochchikade in Colombo.[2] He polished his music ability as a chorister of All Saints’ Church in Borella by Reverend Father John Herath OMI.[6]

He was married to Srima Abeykoon and has one daughter, Dulanjalee Chathurya Ananda and one son, Mario Angelo Ananda.[7] His son Mario Ananda was born on 12 May 1991 and completed education from father's school, St.Joseph College.[8] He started music career after Gratien's death to continue his legacy.[9]

Ananda started to play mouth organ since the age of 3. His music ability was first identified by school music teacher Rev.Father John Herath, where Ananda started to play trumpet and then keyboard. He practiced piano under Lal Perera and Claud Fernando. Then he graduated from Royal College of Music, London with a Diploma in Western Music.[4]

In 1976, Ananda started to play under different bands most notably Stanley Perera's Fortunes, which became his turning point. During that time, he met musician Sarath Dassanayake and joined his orchestra to play guitar. Within the orchestra, his first played the guitar for H.R. Jothipala's Taj Mahalak song. With his extreme musical talent, he was elevated to the position of Assistant Music Director in the orchestra. Under Sarath Dasanayake and Mervin Perera, he started to learn classical Eastern Music.[4]

Later, he worked as the Lead guitarist for many bands including Dreamers, Earnest and the Combo, Superset and Seac for many years.[5] He was also invited to play as a guitarist for Victor Rathnayake's SA Concert.[6]

He released his first cassette in 1978.[7] Ananda was able to sing together with Neela Wickramasinghe for a disc in 1978. His first LP Record contained four songs and all songs had been composed musically by Gration himself. With that song Atha Duraka Detha Pawela, Ananda was invited to sing as a playback singer for films. His maiden playback singing came through Sena Samarasinghe's film Mal Kekulu though the duet Bindu Bindu Kandulu Gala with Shyami Fonseka. After the film, he continued his enormous contribution to Sinhala cinema, where he sang for more than 400 films.[4]

His final song album was Desithaka Gee produced in year 2007 with 12 new songs.[6] In 2009, he launched a CD at the Namel Malini Punchi Theatre on 14 February at 9 am. The CD comprises 23 songs sung at Ananda Rathriya and his son Mario also launched Gayana Gayum made up of 16 tracks on the same day.[12]

He started to compose music for songs Etha Duraka Etha Pawela by himself and Neela Wickramasinghe and Tedini Viraja by Edward Jayakody. Both songs became popular hits, where K.A.W Perera invited Ananda to direct music for his film Durga. With that film, he directed music for about 16 films such as Dhawala Pushpaya, Randenigala Singhaya, Sinha Patawu, Hai Master and Hitha Honda Gaheniyak.[4]

Ananda composed melodies for his fellow artistes, some of them became very popular. Some of his lyrics include Mage Punchi Kumari and Mage Athita Diviya (Wrote by great actor Sanath Gunathilake) for Milton Mallawarachchi, Aradhana Nethu Chaya and Sudu Rosa Mal for Priya Suriyasena, Mangalle Mal for Chandralekha Perera, Sandalatha for Sanath Nandasiri.[6]

On 22 December 2010, Ananda was hospitalized to receive treatments for a number of illnesses including liver failure.[13]

In December 2010, Ananda died at the age of 52 while taking medical assistance at the Colombo National Hospital.[5] He was cremated at the Borella Cemetery. Hospital confirmed that, he died at 6.45 am while receiving treatment at the Intensive Care Unit (ICU).[14]