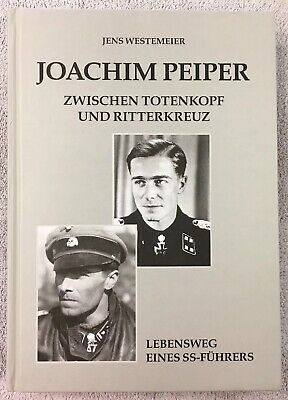 Get Social with AzQuotes. Follow AzQuotes on Facebook, Twitter and Google+. Every day we present the best quotes! Improve yourself, find your inspiration, share with friends. Joachim Peiper (German pronunciation: joˈaχɪm ˈpaɪpər) (30 January 1915–14 July 1976) more often known as Jochen Peiper from the common German nickname for Joachim, was a field grade Waffen-SS officer in World War II, convicted of war crimes in Belgium and accused of war crimes in Italy.

Victims of the Malmedy massacre were preserved under the snow until Allied forces recaptured the area in January 1945.

The Malmedy massacre was a series of killings committed by members of Kampfgruppe Peiper, part of the 1st SS Panzer Division, against American prisoners of war and Belgian civilians during the Battle of the Bulge. Although the killing of over 80 American POWs near Baugnez was the primary subject of the eventual trial, it was only one of a series of war crimes committed by Kampfgruppe Peiper between mid-December 1944 and mid-January 1945.[1] In total, over 750 POWs were murdered, mostly executed at close range by gunshots to the head (though the eventual U.S. Senate investigation would tally the official total at 362 POWs and 111 civilians).[1]

Most of the testimony provided by the survivors stated that about 120 Americans from the 285th Field Artillery Observation Battalion (FAOB), were surprised by the German armored advance on Baugnez, and surrendered.[2][3] They were then gathered in a field near the Baugnez crossroads, at which time the SS troops fired on their prisoners with machine guns.[2][3] Several SS prisoners later testified that a few of the prisoners had tried to escape. Others claimed that a few of the prisoners had recovered their previously discarded weapons and fired on the German troops as they continued their progress toward Ligneuville.[4][5] Of the 84 bodies recovered a month later, most showed wounds to the head, seemingly much more consistent with a deliberate massacre than with self-defense or with injuries inflicted on prisoners who were attempting to escape.[6]

As soon as the SS machine gunners opened fire, the American POWs panicked. Some tried to flee, but most were shot where they stood. A few sought shelter in a café at the crossroads. The SS soldiers set fire to the building, and shot all who tried to escape the flames.[3] Some in the field had dropped to the ground and pretended to be dead when the shooting began.[3] However, SS troops walked among the bodies and shot any who appeared to be alive.[3][4]

On January 13, 1945, American forces secured the areas where the killings occurred. The bodies were recovered on January 14 and January 15, 1945, with the cold weather preserving the evidence and keeping the bodies and their wounds mostly intact.[7] The autopsies revealed that at least twenty of the victims had suffered fatal gunshot wounds to the head, inflicted at very close range.[6] These were in addition to wounds made by automatic weapons. Another 20 showed evidence of small-calibre gunshot wounds to the head without powder-burn residue;[6] 10 had fatal crushing or blunt-trauma injuries, most likely from rifle butts.[6] Some bodies showed a single wound, in the temple or behind the ear.[8] Most of the bodies were found in a very small area, suggesting the victims had been gathered just before they were killed.[9]

The trial – Case Number 6-24 (US vs. Valentin Bersin et al.) – was one of the Dachau Trials, which took place from May 16, 1946 to July 16, 1946. The defendants appeared before a military court of senior American commissioned officers. The defendants were 73 former members of the Waffen-SS, mostly from the SS Division Leibstandarte. Highest in rank were SS-Oberst-Gruppenführer Sepp Dietrich, commander of the 6th Panzer Army, his chief of staff, SS-Brigadeführer Fritz Krämer, SS-Gruppenführer Hermann Priess, commander of the I SS Panzer Corps and SS-Standartenführer Joachim Peiper, commander of the 1st SS Panzer Regiment - the core element of Kampfgruppe Peiper, which conducted the massacre.

The counts of indictment related to the massacre of more than three hundred American prisoners of war 'in the vicinity of Malmedy, Honsfeld, Büllingen, Ligneuville, Stoumont, La Gleize, Cheneux, Petit Thier, Trois Ponts, Stavelot, Wanne and Lutrebois', between December 16, 1944 and January 13, 1945 during the Battle of the Bulge, as well as the massacre of about one hundred Belgian civilians in the vicinity of Stavelot.[10] The defense was directed by Colonel Willis M. Everett Jr., a lawyer from Atlanta, assisted by other American and German lawyers. The prosecution was led by Colonel Burton L Ellis.

Six defendants, including Peiper, complained to the court that they had been victims of physical violence or threats of violence meant to force them to provide extrajudicial confessions.[10] The defendants were invited to confirm the statements they had made under oath.[10] Of the nine who testified, three had claimed mistreatment they had suffered.[11] For most of the accused, the defense argued that they either had not participated, or had done so by obeying a superior's orders.[7] The court ruled that all but one of the defendants were guilty in some degree. Forty-three were sentenced to death, including Peiper; the rest were sentenced to from ten years to life in prison. Dietrich received a life sentence and Priess 20 years imprisonment.

On July 16, 1946 the verdict was delivered on 73 members of the Kampfgruppe Peiper.

Pursuant to procedure, an in-house review was undertaken by the American Occupation Army in Germany; the trial was carefully examined by a deputy judge. Taking into account doubts which surrounded the investigation phase, he issued in several cases recommendations of free pardon or commutation of the death sentences[further explanation needed], which were often followed by General Lucius Clay,[when?] the Commander of the American zone in occupied Germany.[7]

Colonel Everett was convinced that a fair trial had not been granted to the defendants: in addition to alleged mock trials, he claimed that 'to extort confessions, U.S. prosecution teams 'had kept the German defendants in dark, solitary confinement at near starvation rations up to six months; had applied various forms of torture, including the driving of burning matches under the prisoners' fingernails; had administered beatings which resulted in broken jaws and arms and permanently injured testicles'.'[12]

Approximately sixteen months after the end of the trial, almost all the defendants presented affidavits repudiating their former confessions and alleging aggravated duress of all types.[13]

The turmoil raised by this case caused the Secretary of the Army, Kenneth Royall, to create a commission chaired by Judge Gordon A. Simpson of Texas to investigate. Apparently,[according to whom?] the Commission was interested not only in the facts of the Malmedy massacre trial, but also had to deal with other cases judged by the International Military Tribunals in Europe.[example needed]

The commission supported Everett's accusations regarding mock trials[specify] and neither disputed nor denied his charges of torture of the defendants.[12] The Commission expressed the opinion that the pre-trial investigation had not been properly conducted and that the members felt that no death sentence should be executed where such a doubt existed.[14] One of the members of the commission, Judge Edward L. Van Roden of Pennsylvania, made several public statements alleging that physical violence had been inflicted on the accused. Nullsoft global hotkey.

All but two of the Germans in the 139 cases we investigated had been kicked in the testicles beyond repair. This was standard operating procedure with our American investigators.[15]

Furthermore, under his signature, an article denouncing the conditions under which the assumed guilt of Malmedy defendants and of other questionable cases was going to be published in February 1949 with the assistance of the National Council for Prevention of War.[16] He refused to commute the six remaining death sentences, including Peiper's, but the executions were postponed.

Eventually, the United States Senate decided to investigate. Ultimately, the case was entrusted to the Committee on Armed Services over the Judiciary Committee and the Committee on Expenditures in the Executive Departments. The investigation was entrusted to a subcommittee of three senators chaired by Raymond E. Baldwin. The subcommittee was set up on March 29, 1949. Its members went to Germany and during its hearings, the commission heard from no fewer than 108 witnesses.[citation needed]

Joseph McCarthy had obtained from the subcommittee's chairman authorization to attend the hearings. McCarthy's state, Wisconsin, had a large population of German heritage, spurring allegations that McCarthy was politically motivated in his work on behalf of the Malmedy defendants.[17] He used an aggressive questioning style during the proceedings.[18] McCarthy's actions further inflamed a split between the American Legion, which took a hardline position after Malmedy and generally supported upholding the death sentences, and the Veterans of Foreign Wars, who supported more lenient penalties for the Waffen-SS members under Peiper.[19] The last clash took place in May 1949 when he asked that Lieutenant Perl to be given a lie detection test. Mixvibes dj software free download. Since this had been rejected by Baldwin, McCarthy left the session claiming that Baldwin was trying to whitewash the American military.[20]

While on the one hand McCarthy was far from impartial, two of the members of the three-man subcommittee, the chairman Senator Raymond Baldwin and Senator Lester Hunt have been accused by historian David Oshinsky of being 'determined to exonerate the Army at all costs'.[21] Oshinsky also alleges that the third member of the committee, Senator Estes Kefauver, displayed a lack of interest in the case, attending only two of the first fifteen hearings.[22] McCarthy sought to denounce Baldwin in front of the whole Senate,[according to whom?] but his efforts were repudiated by the Commission on Armed Forces, which clearly showed its support for Baldwin[how?] and eventually adopted the report of the subcommittee.[citation needed]

In its report, the subcommittee rejected the most serious charges, including beatings, torture, mock executions and starvation of the defendants.[page needed] In addition, the subcommittee determined that commutations of sentences pronounced by General Clay had occurred because of the U.S. Army's recognition that procedural irregularities could have occurred during the trial.[page needed] The commission did not exonerate the defendants or absolve them of guilt and it endorsed the conclusions General Clay issued in the particular case of Lieutenant Christ. In summary, Clay had written that 'he was personally convinced of the culpability of Lieutenant Christ and, that for this reason his death sentence was fully justified. But, to apply this sentence would be equivalent accepting a bad administration of justice, which led [him], not without reserve, to commute the death penalty to life imprisonment'.[23]