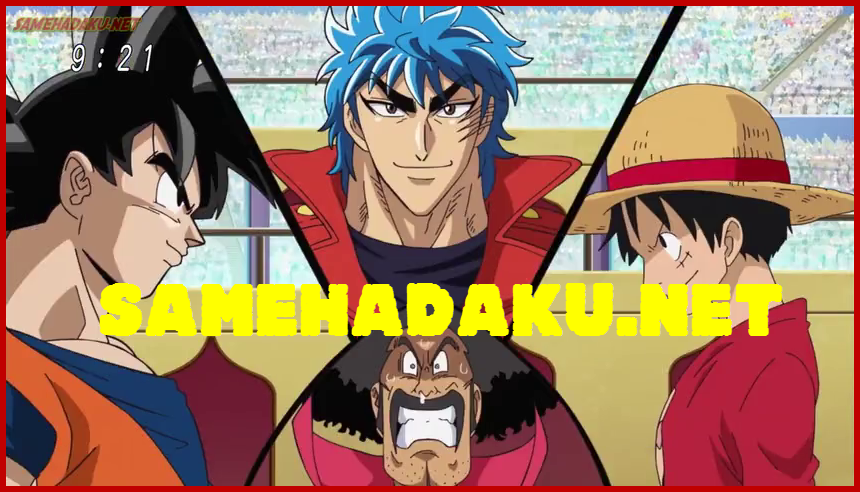 The Dream 9 Toriko & One Piece & Dragon Ball Z Super Collaboration Special (Japanese: トリコ×ONE PIECE×ドラゴンボールZ 超コラボスペシャル!!) is a crossover special which aired on April 7, 2013, on Fuji TV. It was made to commemorate the start of the third year of the Toriko anime, which premiered in April 2011, and it features characters from Dragon Ball Z, One Piece and Toriko. The special consists of two episodes which aired together: Episode 99 of Toriko, Run, Strongest Team! Toriko, Luffy, and Goku! (走れ最強軍団！トリコとルフィと悟空！), and episode 590 of One Piece, The Mightiest Collaboration in History vs. the Gluttonous of the Sea (史上最強コラボVS海の大食漢).

The group arrive at a crossroads and split up between a mountain, desert and forest route. Sanji, Komatsu, Setsuno and Gohan travel through a forest, running into a Manpukuhihi; Rather than fight it, Setsuno explains that it will let them pass if they can satisfy its hunger and Sanji and Komatsu cook it several plates of food. On the desert route Brook and Roshi fake heat exhaustion and claim that indecent acts from Nami and Rin will help them recover, which is unsuccessful. Meanwhile, Franky irritates No. 18 by insisting how 'Super' being a cyborg is. Elsewhere, Trunks and Goten use Fusion to become Gotenks; Chopper attempts to perform fusion himself, but his only partner is a disgusted Sunny, who refuses. Luffy, Toriko and Luffy take the most difficult path: the mountain route. Goku races ahead of the other two, but is summoned by King Kai to stop an incoming dangerous creature from space. At the edge of the forest, Tina reports as Zoro arrives lost and is quickly challenged by Zebra. Having just heard of the race, Vegeta arrives looking for Goku, but quickly ends up in a three way challenge with the other two, prompting Tina to run in panic and end her coverage.

Luffy, Toriko, and Goku (having already defeated the space creature) reach the finish line and grab the Goal flag at the same time, instigating a battle between the three for victory; As the battle arena is assembled, Satan accidentally falls in and the other announcers assume he is competing alongside the three finalists. Luffy, Goku, and Toriko underestimate their attacks and destroy most of the arena, leaving only a small section where Satan is cowering. Because of this, Satan is technically the only contender still in bounds and wins the tournament. Satan decides to share the meat between all the finalists and their friends as a mysterious creature approaches the island.

Satan shares the Carat Sizzled Cattle prize with the rest of the group, pointing out that he will enjoy it more by sharing it with his friends. During the meal, Robin, Piccolo and Coco become suspicious of the IGO's motives and question Mansam. Mansam reveals that the tournament was a plan to gather the world's strongest fighters and capture the Deep Sea Glutton creature Akami, which has the ability to suck out the energy of living things. Akami jumps out from the sea and steals the powers of Usopp, Satan, and Gohan, becoming larger and stronger. Akami escapes and Setsuno informs everyone that they have 30 minutes to catch it and save those it attacked.

Sanji, Brook, Franky, Sunny, Coco, Piccolo, Goten, and Trunks all attempt to attack Akami, but have their energy drained as well, allowing Akami to evolve into a more powerful form. Luffy, Toriko and Goku find and attack Akami, and are impressed by each other's fighting skills. Their attack is unsuccessful however, as Akami can now absorb the power of attacks thrown at it too. Therefore, Toriko realizes that they need to use an attack powerful enough to defeat Akami in a single hit. Goku asks Luffy and Toriko to distract Akami while he charges a Spirit Bomb, borrowing energy from the living beings around him. As Akami begins stealing energy from the charging Spirit Bomb, Goku requests that the other people at the tournament lend their energy to the attack too. Luffy, Toriko and Goku hit Akami with an Elephant Gatling, Twin Kugi Punch and Kamehameha alongside the Genki Dama, finishing off Akami. The group celebrates with a banquet, eating Akami, while Zoro, Zebra and Vegeta are still fighting elsewhere on the island.[1]

Characters from Dragon Ball and One Piece were already featured together in the 2006 special collaboration manga Cross Epoch, and characters from One Piece and Toriko were already featured together in a 2011 special One Piece x Toriko Crossover manga and two one-hour special Toriko × One Piece crossovers which aired in April 2011 and April 2012 respectively, and which were shown either before or after the weekly episodes of One Piece. Also, Toriko and One Piece share Fuji TV's 'Dream 9' (ドリーム9) programming block that begins on Sundays at 9:00 a.m. since April 2011. The 'Dream 9' tag was also previously used to promote the time slots of Dragon Ball Kai and One Piece during their original broadcast, as Dragon Ball Kai was followed by One Piece when it first aired in Japan; special eyecatches featuring the characters from both series were even made and shown between the two series.[citation needed] Also, various animated multi-screen Panic Adventure crossovers of various Shueisha manga series, including Dragon Ball and One Piece, have already been screened at special events.[citation needed]

The Super Collaboration Special aired split in two part in the time slot between 09:00 and 10:00 on Fuji TV, on April 7, 2013, which is one week after the movie Dragon Ball Z: Battle of Gods premiered in Japan. A special pre-sale Collaboration Ticket for the 2013 Battle of Gods and One Piece Z movies went on sale on November 23, 2012. The dual-ticket has a special illustration by both Eiichirō Oda and Akira Toriyama featuring Luffy and Goku.[citation needed]