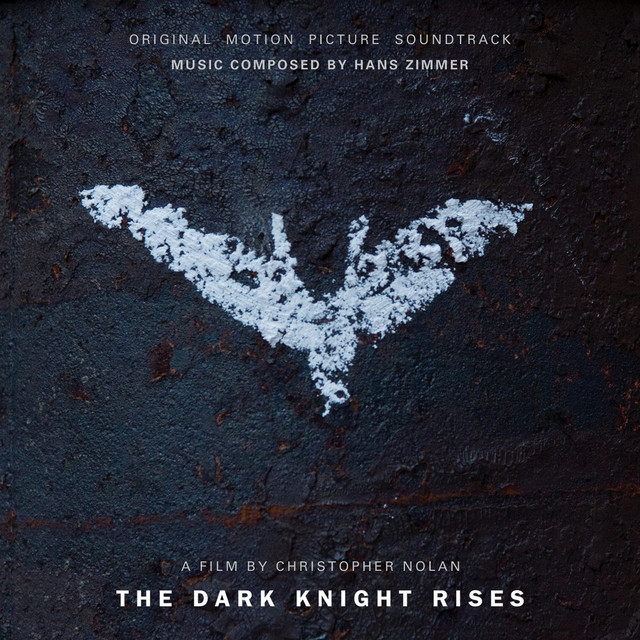 Batman Begins explored the character of Bruce Wayne and the creation of The Batman through the expression of his fear. The Dark Knight follows with a theme of escalation as the criminal world responds to the presence of the Batman. Musically, James Newton Howard and Hans Zimmer's score also escalates and delves further into dark territory. I did not get the chance to review the Batman Begins score three years ago because I was away, so I will talk a bit about the themes and the use of score in that film before diving into The Dark Knight; it follows a logical musical progression and it's important to get the beginning in there. Christopher Nolan knows what he wants in a score and Howard and Zimmer, in my opinion, are perfect choices to flesh out Nolan's Batman universe.

The first film introduced a number of themes, including one for the Wayne family and a general two-note brass theme currently heard in all the Dark Knight trailers. A rising hero theme was slowly developed through the course of Batman Begins, starting when he saved Ducard from falling off the cliff and reaching its full statement when he pulls open the cabinet to reveal the batsuit after Rachel says she's going to Arkham (sadly not on the album). If I had reviewed Batman Begins, I would have called this the 'Batman theme' and I would have been wrong. I will explain later. The final notable theme to mention would be everyone's favorite two-note eighth note rhythmic pattern that weaves in and out of the entire score. This is an 'anxiety' motif that reflects Bruce/Batman's increasing fears and frustrations as a person seeking justice. It is also a common mechanism in Zimmer's studio's recent scores for keeping the music moving (King Arthur, The Island, Transformers, etc.)

Zimmer and Howard have stated that, despite comments that the score sounds more like Zimmer's work, they cannot even identify who wrote which cue in either film. Despite the final product, both had their hands in the entire score, perhaps with the exception of Zimmer's work for The Joker. A good example of their collaboration is the fate of the Rising Hero theme from Batman Begins. With the character of The Batman established by the beginning of The Dark Knight, this theme moves to Harvey Dent and Howard took over the primary use of the theme as Zimmer took on the Joker. This theme is prominent in the 'Harvey Two-Face' suite and also at the start of 'Blood on My Hands' which plays during Dent's press conference. The theme is used in a very different way in The Dark Knight, not highlighting triumphant scenes like for Batman in the first film, but underscoring the DA's efforts to take over the fight against crime in Gotham. Howard keeps this theme generally in the light strings and piano, but turns to darker and bolder instrumentation for Dent's scenes later in the film. This suite covers most of that and also features a triumphant yet tragic statement of the Wayne theme at the end, which does not appear in the film.

Comparisons are being made to Elfman, Goldenthal and Walker's scores from the 80's and 90's and there is really no reason for it. Not only is Nolan starting the franchise over from scratch, but he is setting it in modern times in a realistic manner. Gothic, heroic themes would not fit in this world, as Zimmer, Howard, and Nolan have all stated. A good example is the new take on the Joker. Shirley Walker gave the character a bouncy circus theme for the animated series that was perfect for the goofy stunts in the show; Ledger's Joker is not like that at all. Zimmer's take is appropriately unnerving and chaotic. 'Why So Serious' introduces this sound design during the bank heist with electric cello, guitar and other harsh electronics. Zimmer recorded live orchestra and then reworked it with synthesizers for this effect, constructing the sound rather than recording the sound. The Joker themes are based on electronic rhythms rather than melodies or chords and come in pulses and ticking electronic beats. Often, this music would appear before the character, increasing the audiences' apprehension for what was to come. These cues are more like Black Hawk Down than anything else Zimmer has done, but is taken to an even more extreme level. This style is interspersed with the other parts of the score on the album, but if one can get past the strange sound design, it does make for an interesting listen when keeping Ledger's character in mind because of its strange way of meandering into the other parts of the score.

While there is no heroic, triumphant Batman theme, Zimmer did include a new theme for the character in The Dark Knight. The first statement of this theme is at the end of 'I'm Not A Hero' following a short variation of the Rising Hero theme. It appears in full in 'Like A Dog Chasing Cars', 'Introduce A Little Anarchy', and 'A Dark Knight'. It is an alternating three-note theme in the brass with racing strings beneath it. Its statement in 'Like A Dog Chasing Cars' is from the final fight with the Joker and sounds like Zimmer's finale cues for Pirates of the Caribbean: Dead Man's Chest and The Da Vinci Code, but has a darker, more urgent pace. The anxiety motif runs along beneath it in the strings. The use of this well-known motif in The Dark Knight follows the theme of the films. In Batman Begins, Bruce's anxiety and fear was simpler as was his vision of Batman. By the end of The Dark Knight, things are much more complicated. The use of this theme reflects that. This is not as simple a motif as it sounds and its most important uses generally go unheard in the film as they work toward the unconscious tension of the film rather than the audible.

The first time the anxiety motif is heard on this album is new, which is opening the track 'I'm Not A Hero' with an electronic percussion version of it. In 'Aggressive Expansion' the motif pounds along in the bass strings and is nearly unrecognizable from the simple, floating rhythm from Batman Begins. It returns to this in 'A Dark Knight' as it runs along beneath the Batman theme, but takes on a darker electronic feel. Another minor theme that returns from the first film seems to be for when Bruce is in danger of losing things from his past. It is a descending motif on the piano, used when Alfred saves him from the burning Wayne manor and is in a certain scene in The Dark Knight when Rachel's life is in danger. It appears on the album at the beginning of 'Agent of Chaos'. Another minor theme worth mentioning was played during Bruce's plane ride into Hong Kong and is a meandering bass string line, featured in the beginning of 'I'm Not A Hero' and can also be heard in the 'Antrozous' track from Batman Begins.

The end of the album takes the score into new territory. 'Watch the World Burn' is a dark, full string chorus playing with a sorrowful and tragic tone. It sounds most like something out of Gladiator or The Happening. This tone continues through to the epic 'A Dark Knight' finale cue. The last statement of the Batman theme is not triumphant, but performed by a quiet horn and solo cello backed by the anxiety theme for the first half. The latter part of the cue slows and delves into even darker territory. This score highlight's Batman's role in Gotham as the hero the city deserves, but not the one it needs. He is the dark knight after all, in contrast to Harvey Dent's white knight. Rousing brass themes do not belong with this character. The main theme, that two-note rising brass theme, is stated at the end of the cue a few times over the electronic anxiety motif and then fades to an uneasy ending.

There are some elements from Batman Begins that would have been nice to hear in The Dark Knight. Missing from the sequel are some beloved themes from Batman Begins including the solo soprano vocals and the Wayne theme, which is probably because there was no Wayne Manor. It appears on the album at the end of the 'Harvey Two-Face' suite, but not in the film. Also notably missing is the key action cue from 'Molossus' during the Batmobile chase. This action theme is a variation of the Rising Hero theme, and therefore could not be used for Batman in the sequel. The other thing I would have liked to hear was a bit more dramatic a change in the score for Dent as he moved along a dark path. Howard's work on this character is more subtle and harder to hear in the film. The suite doesn't quite do this work justice.

Zimmer and Howard need to be commended on the direction they decided to take this score. It may not be easy to listen to on album, but really pushes the boundaries between score and sound design. As far as the rating goes, they have both done better work. The end result is impressive in its creativity, but makes for a unique album, though not the easiest to listen to in places. But in the film, it is very good and very effective. It is also much more prominent in the IMAX audio than in the regular theater. It is also important to note that the soundtrack album is made up of a number of suites rather than film cues, so even many titles to not correspond to the scenes. In my interview with the composers, Howard stated that Zimmer's work on the Joker is one of the best conceptualizations of an idea he's ever heard. On that point I have to agree. He was able to capture and, in that respect highlight, the chaos, unpredictability, and fear that pervaded Heath Ledger's Joker.

If any information appears to be missing from this page, contact us and let us know!