Alfred Matthew 'Weird Al' Yankovic (born October 23, 1959) is an Americansinger-songwriter, musician, parodist, record producer, satirist, music video director, movie producer, actor, and author. He is known mainly for his parodies of popular songs. He has also starred in a movie called UHF (1989). Yankovic had a children's program for a short time. It was named The Weird Al Show. He has made parodies of songs such as 'American Pie' (his ever popular 'The Saga Begins'), 'Ridin' ('White and Nerdy'), 'Bad' ('Fat'), 'Like a Virgin' ('Like a Surgeon') and 'Gangster's Paradise' ('Amish Paradise').

He also has a band to help him perform his songs. His band members are: Jim West (guitar), Steve Jay (bass), Rubén Valtierra (piano), and Jon 'Bermuda' Schwartz (drums). 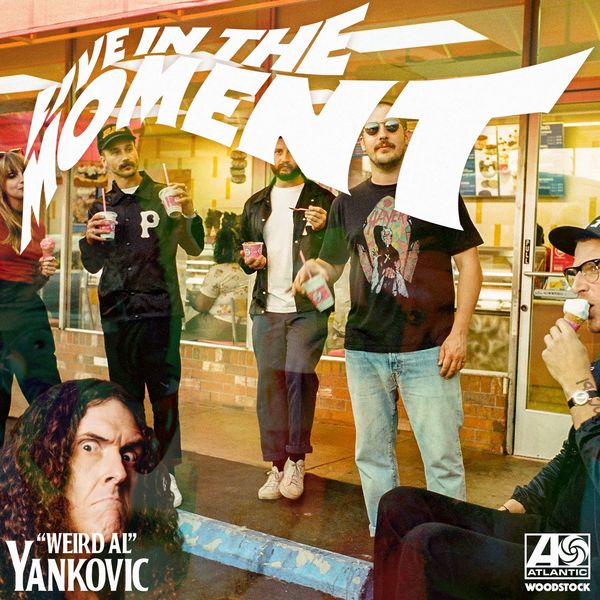 Yankovic has also written a children's book titled When I Grow Up.[1]

Alfred was born in Downey, California. He was raised in the town of Lynwood, California. He is the only child of Nick Louis Yankovic (June 4, 1917 – April 9, 2004)[2] and Mary Elizabeth Yankovic (née Vivalda; February 7, 1923 – April 9, 2004).[2] His father was born in Kansas City, Kansas, of Yugoslavian[2][3] ancestry, and began living in California after serving during World War II;[4][5] he believed 'the key to success' was 'doing for a living whatever makes you happy' and often reminded his son of this philosophy.[4] Nick Yankovic married Mary Elizabeth Vivalda in 1949. Mary, who was of Italian and English descent, and had come to California from Kentucky, gave birth to Alfred ten years later.[4]

'Fat' is a song by 'Weird Al' Yankovic. It is a parody of 'Bad' by Michael Jackson. It is Yankovic's second parody of a Jackson song, the first being 'Eat It', a parody of Jackson's 'Beat It'. 'Fat' is the first song on Yankovic's Even Worse album.

The video won a Grammy Award for Best Concept Music Video in 1988.[1]

Yankovic came up with the idea for 'Fat' while watching the 'Bad' music video, when he had an epiphany that a parody of that song titled Fat would be a good sequel to 'Eat It' (a previous Weird Al Michael Jackson parody). As he watched the 'Bad' video, he imagined an obese version of himself trying to get through the turnstiles on a subway, and resolved that he would do it.[2]

When performing in concert, Yankovic wears a costume that makes his body appear pudgy, along with a mask that makes his face look fat. Due to undergoing laser vision correction surgery, he no longer needs to wear glasses, though he wears glasses with non-prescription plastic lenses in order to help hold on the mask.[3]

Directed by Jay Levey,[4] the video for 'Fat' parodies various elements of the 'Bad' video by Jackson; Yankovic was able to get permission from Michael Jackson to use the same subway set from 'Bad' for the video, which had yet to be struck in Culver City.[5] Jackson had built an exact replica of the original set for the movie Moonwalker to be used in the segment called 'Badder', and before striking it, he offered to allow Yankovic to use it.[6]

The fat suit Yankovic wore was done with practical effects and makeup. This included having latex bladders glued to his face along with similar air pockets through his clothes. When he was inflated on the video, several crew members were blowing into tubes that ran into these bladders and pockets to simulate the effect.[5]