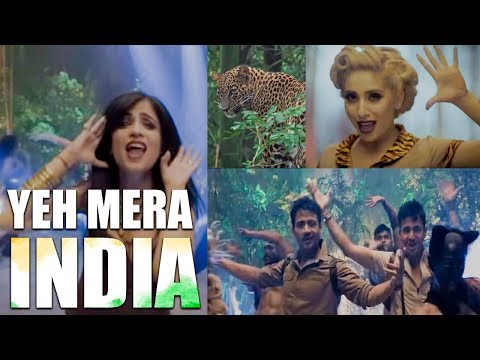 Animal Planet adds new flavour to its most celebrated programming line-up Yeh Mera India. Commemorating the 69 th year of India’s Independence, Animal Planet will launch a new campaign taking viewers on an exotic journey to explore some of the rarely seen and endangered wildlife of the country. Travelling across the Himalayan Mountains, down the mighty River Ganges to the rainforests of.

A new multi-lingual song by Bollywood music composers Meet Brothers extolling India's dazzling array of fauna is set to premiere on Animal Planet's new show that gives an overview of the country's wildlife.

Commemorating the 69th year of India’s Independence, the month-long show seeks to take viewers on an exotic journey to explore some rarely seen and endangered wildlife of the country. Manmeet Singh of Meet Brothers’ says of the song, “…It’s a musical tribute to the independence of animals.” The Party in the Jungle theme for the anthem described by fellow Meet Brother composer Harmeet Singh as both sensational and celebratory. “The soundtrack is designed to match the progressive state of mind of today’s youth,” he says.

The show itself is billed as bringing “a realistic and hopeful picture amongst the complex human-wildlife interactions.” Wildlife and pristine natural beauty of India through Himalayan Mountains down to the Ganga river to the rain forests of Shola and Western Ghats are showcased in the programme. It provides insights into how some of the endangered animals like the elephant, the guar (Indian bison), the Nilgiri Tahr, the sambhar (the largest of Indian deer), abound in the lush forests are vulnerable owing to urban development, habitat destruction and poaching.

Works of renowned conservationists and experts like Valmik Thapar, Ullas Karanth, Jeremy Wade, Steve Backshall, and Niall McCann who have been exploring and supporting the conservation of wildlife in the country have been projected in the show. Rahul Johri, EVP and GM – South Asia, Discovery Networks Asia Pacific says, “Yeh Mera India is an initiative to build viewers’ interest and pride in the wildlife of India. The programming will reveal the magnificent natural heritage and will inspire audience to preserve it for future generations.”